The prosecution ploughed methodically through its case in the second day of the trial of the Shannon Two. Since the defense has already stipulated to most of the factual statements that the testimony was meant to establish, the main new information the jury got from today’s witnesses was that defendants Ken Mayers and Tarak Kauff were model arrestees, pleasant, cooperative, and compliant, and that the airport’s chief security officer has no idea whether weapons are moving through the airport he guards. 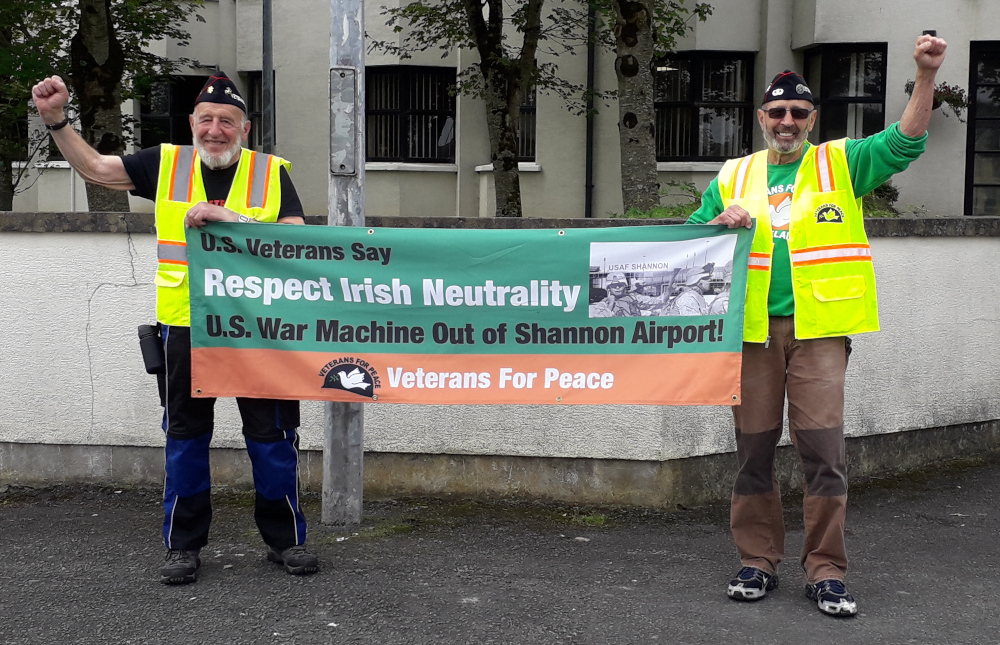 Mayers and Kauff were arrested March 17, 2019, at Shannon Airport for going onto the airfield to inspect any aircraft associated with the U.S. military that were at the airport. When they entered the airport there were two US military aircraft at the airport, one US Marine Corps Cessna jet, and one US air force transport C40 aircraft and one Omni Air International aircraft on contract to the US military that they believed carried troops and weapons through the airport on their way to illegal wars in the Middle East, in violation of Irish neutrality and international law. The U.S. and Irish governments, and the Irish Department of Foreign Affairs (which approved the refuelling of the US military aircraft at Shannon) maintain the fiction that there are no weapons being carried on the US military aircraft, and that these aircraft are also not on military exercises and not on military operations. However even if this were true, the very presence of these aircraft passing through Shannon airport on their way to a war zone is in clear breach of international laws on neutrality.

Inexplicably, the Irish Department of Transport, which approves the refuelling of civilian aircraft contracted to the US military to transport troops through Shannon Airport also approves the fact that most the US troops travelling on these aircraft are carrying automatic rifles with them through Shannon airport. This is also in clear breach of international laws on neutrality and is also arguably in breach of the Irish Department of Foreign Affairs prohibition on the transit of weapons of belligerent states through Irish territory.

The two men have pleaded not guilty to charges of criminal damage, trespass, and interfering with airport operations and safety.

The prosecution presented eight witnesses in the second day of the trial at the Dublin Circuit Court—three Garda (police) from the local Shannon station and Ennis Co Clare, two Shannon Airport Police, and the airport’s duty manager, its maintenance manager, and its chief security officer.

Most of the testimony concerned details such as when the intruders were first noticed, who was called, when and where they were taken, how many times they were read their rights, and how the hole in the airport perimeter fence through which they entered the airfield was repaired. There was also testimony about the temporary closing down of airport operations while airport personnel made sure there were no other unauthorized personnel on the airfield, and three outgoing flights and one incoming flight that were delayed by up to a half-hour.

The defense has already conceded that Kauff and Mayers had “been involved in the making of an opening in the perimeter fence,” and that they had indeed entered the “curtilage” (surrounding land) of the airport, and that they had no issues with their arrest and subsequent treatment by the police, so much of this testimony was not needed to establish these matters of agreed-upon fact.

In cross-examination, the defense barristers, Michael Hourigan and Carol Doherty, working with solicitors David Johnston and Michael Finucane, focused more on the issues that had caused Mayers and Kauff to enter the airfield—the transport of troops and munitions through neutral Ireland on their way to illegal wars—and the fact that the two were clearly engaged in protest. The defense brought out the point that it was commonly known that flights by civilian airline Omni were chartered by the U.S. military and carried military personnel to and from the Middle East, where the United States was carrying out illegal wars and occupations.

Richard Moloney, Shannon Airport Police Fire Officer, said the Omni flight that Kauff and Mayers wanted to inspect “would be there for the purpose of transporting military personnel.” He compared Shannon Airport to a “big petrol station in the sky,” saying it was “strategically positioned in the world—perfect distance from America and perfect distance from the Middle East.” He said that the Omni troop flights used Shannon “for a fuel stopover or food stopover on their way to Eastern Europe and the Middle East.”

Shannon Garda Noel Carroll, who was the initial arresting officer on the scene, was at the airport at the time performing what he called “close protection of two American military aircraft” that were on Taxiway 11. He explained that this involved remaining “in close proximity” to the planes while they were on the taxiway and that three army personnel were also assigned to this duty. When asked whether he had ever been required to go aboard one of the U.S. military aircraft at Shannon to inspect it for weapons, he replied, “Never.”

The most surprising testimony came from John Francis, Chief Airport Security Officer at Shannon since 2003. In his position, he is responsible for aviation security, campus security, and security systems, and is the point of contact for Garda, armed forces, and other government agencies.

The jury also heard testimony from five other prosecution witnesses: Airport Security Officer Noel McCarthy; Raymond Pyne, the Duty Airport Manager who made the decision to shut down operations for a half-hour; Mark Brady, the Airport Maintenance Manager who oversaw repairs to the perimeter fence, and Shannon Gardai Pat Keating and Brian Jackman, who both served as “Member in Charge,” responsible for assuring that arrestees’ rights are respected and that they are not mistreated.

Despite the prosecution’s focus on proving that Mayers and Kauff cut a hole in the perimeter fence and entered the airfield without authorization, facts they readily concede, for the defendants, the central issue of the trial is continuing U.S. use of Shannon airport as a military facility, making Ireland complicit in its illegal invasions and occupations. Says Mayers: “The most important thing to come out of this trial would be a greater recognition on the part of both Irish elected representatives and the public of the importance of Irish neutrality and the great threat presented by the U.S. manipulation of governments around the world.”

There was one other theme that emerged from the testimony today: Kauff and Mayers were universally described as polite and cooperative. Said Garda Keating, they were “probably the two best custodians I’ve ever had in 25 years.” Airport Police Fire Officer Moloney went further: It was “not my first rodeo with peace protesters,” he said, but these two were “the nicest and most courteous I have met in my 19 years at Shannon Airport.”