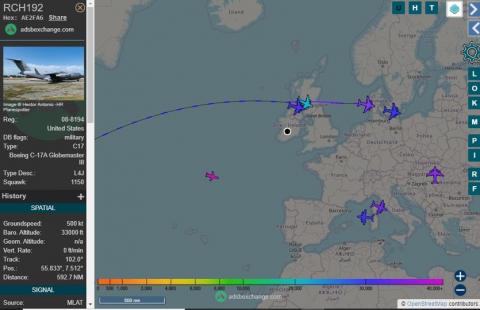 At about 9.30pm yesterday evening Sunday night, four C17 Globemaster transport aircraft, one Canadian and three from the US, crossed over Northern Ireland.

They were probably heading towards Ukraine as they seem to be on a route that would avoid German air space.

The US and other NATO countries are operating an air bridge to ship military aid to Ukraine, flying in weapons and ammunition that Kyiv has requested. In January, US President Joe Biden approved $200 million in new military aid for Ukraine. NATO members, including the UK and the Baltic states, have also sent plane loads of weapons. What makes our Irish government think it is ok to facilitate this, given that we claim to be neutral?

It is unclear if Russia will invade Ukraine. They are still adamant that they have no plans to attack the country, and their foreign intelligence chief Sergei Naryshkin has condemned the "dangerous lies" being spread by the US and in Western capitals.

At the same time NATO's secretary general is warning that the risk of conflict is very real. The US says a Russian invasion could happen any day now, but it also acknowledges that it does not know if President Putin has decided on it.

What we do know is that there are a lot of lies, opportunistic military build-ups by both sides along a NATO/Russia frontier, and weapons producers that are waiting to supply more weapons as soon as missiles are fired.

The US and Canada and to a lesser extend Britain are far enough from Ukraine to avoid direct involvement in a war in Ukraine. Boris Johnson and Joe Biden may feel its OK to pour weapons and munitions into Ukraine and provoke a war there, at a time when their popularity needs a boost. But it is reckless and dangerous position to take. Tens of thousands of people could die,

We would like to hear Simon Coveney and the Irish government taking a committed and coherent stand against the build-up of military power in Eastern Europe. We welcome his statement that it's important not to “over-heat” the situation. And he is reported as saying that Ireland has consistently been talking about the need to defuse tension to focus on diplomacy and political dialogue, as opposed to military buildup, and that we will continue to be that voice.

And yet, he supports US military buildups around the world by permitting their ongoing use of Shannon Airport.

All we are asking Minister, is that you do what you say we should do. Start by ending the use of Irish airspace and airports by the US military.