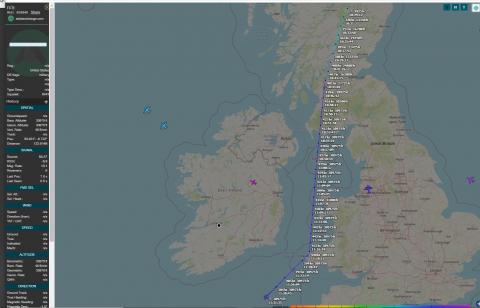 Today Ireland seems to be in the centre of a NATO / Russian storm. It may well be seen as a storm in a tea-cup, but the reality is much more serious than that.

In the course of the morning a US spy aircraft P8 Poseidon took off from an air base in north of Scotland and flew down the Irish Sea, heading towards where the Russian naval exercises in the Atlantic are not now taking place..

Two US Hercules C130 numbers 11-5725 and 12-5773 coming from Ramstein air base in Germany overflew Irish air space and territory, heading north East off the coast of Mayo. Not far behind these two C130's was a US Air Force Gulfstream 5 number 01-0076 also overflying Ireland and taking the same flight path as the two Hercules C130.

According to our Irish Minister for Foreign Affairs and Minister For Defence Simon Coveney, US military aircraft must not fly through Irish airspace if they are on military exercises, or military operations or engaged in intelligence gathering operations, or carrying weapons or munitions. Therefore these three overflights would appear to be provocations.

Do they do this just because they can?

In addition, an Omni aircraft on contract to the US military arrived at Shannon for refueling in the afternoon. Its number is N378AX and it came from Norfolk Naval Air Station in Virginia USA.

In the screenshot above we can see all four of the US military aircraft. The 2 Hercules C130 are the 2 blue ones off the north east coast of Mayo, the Gulfstream 5 is the red one over the midlands, and the P8 Poseidon is the one flying south of Wexford. The Poseidon did not fly through Irish airspace as far as we know; the others did.